66% of bikes stolen in Dublin are locked using easy-to-cut locks.

Cyclists need to use better locks and lock their bikes when at home to avoid being victims of bike theft according to a Bike Theft Working Group that has been set up through Dublin City Council.

An tArdmheara, Críona Ní Dhálaigh, launching the Bike Security Campaign today, said “The aim of the campaign is to raise awareness of the issue of bike theft and alert cyclists to the need to use higher quality locks. It is vital that cycling is supported and encouraged in the city and a big part of this is to reduce bike theft.  Beidh níos mó misneach ag daoine rothaíocht sa chathair má cheapann siad go mbeidh an rothar slán ann”.

A Dublin Cycling Campaign survey from December 2014, showed that 66% of bikes stolen in Dublin are locked using cable locks or sub-standard U-locks or chain locks and, according to the group, these can be easily cut through and offer limited security.

The Bike Theft Group recommends that cyclists use U-locks with the `Sold Secure` accreditation as their main lock, with cable or chain and padlocks only to be used as a secondary lock. `Sold Secure` is an independent rating system for locks.

4,950 bikes were reported stolen in Dublin in 2014, an increase of 3,077 since 2008, (+162%), the year before the Bike to Work scheme was introduced. However there is a large degree of under-reporting and based on survey data from UK and Northern Ireland, the actual number for bike theft is likely to be a multiple of that figure.

The Bike Theft Group has this advice for cyclists:

Quoting from the same survey from December `14, Dublin Cycling Campaign says that 1 in 6 victims of bike theft in Dublin stop cycling altogether and a further 26% reduce the amount they cycle following a bike theft. David Timoney from the Cycling Campaign said “The evidence from our survey as well as surveys in the UK shows that there is a strong link between bike theft and cycling numbers. If we are serious about achieving the targets for cycling modal share in Dublin, bike theft is one of the areas that needs to be tackled.”

The Bike Theft working group was set up earlier this year to tackle the growing problem of bike theft in the city and has representatives from An Garda Síochána, the National Transport Authority, Dublin Cycling Campaign, Bike shops and Dublin City Council. “London and Amsterdam in particular have had great success in reducing bike theft in recent years and with all stakeholders working together through this Bike Theft Group we aim to achieve the same in Dublin” says Councillor Ciaran Cuffe, who chairs the group.

Inspector Liam Geraghty says that “An Garda Síochána supports the continued increase in bicycle use in Dublin City.  Targeting bike theft is a three prong approach: education, engineering and enforcement. This poster campaign will inform bicycle users on crime prevention through the need to invest in high quality locks and how to lock their bicycle securely at all times.  The NTA and DCC are examining ways of improving bicycle parking facilities in the city.  We in An Garda Síochána continue to focus on bicycle theft with targeted intelligence led and modern enforcement activity.”

The National Transport Authority (NTA) representative on the group, Cormac Ross, says that “With the significant increase in cyclists in Dublin in recent years, bike theft has become a more serious issue. The NTA is happy to collaborate with other key stakeholders in a joint effort to address bicycle theft in a targeted way. The use of higher quality locks by cyclists is likely to result in the most significant positive impact on theft numbers in the short term, and this initiative is focused on the delivery of that key message”.

“The NTA will be communicating this message and poster nationally through our Smarter Travel & Green Schools Programme, complementing an earlier NTA bicycle parking awareness initiative. In addition, the NTA funded a Bicycle Parking Study, undertaken by Dublin City Council, during 2015. The NTA is currently funding measures recommended in that study, including  an increase in on-street cycle parking around the Capital, as well as the development and expansion of secure off-street cycle parking at Drury Street and elsewhere”. 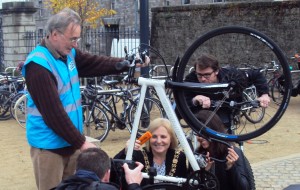 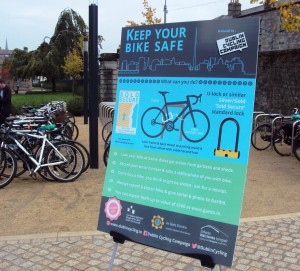