Bus journey times along the quays have improved by up to 45% in some instances, since the new bus prioritisation measures were introduced at the beginning of September this year.

Following a comparison of bus journeys in the first full week of September this year with the same period last year, there have been substantial reductions in bus journey times along the north and south quays at just about every time of the day.

For buses travelling along the north quays, journey times between Ormond Quay and D’Olier  Street decreased by 37% between 8am and 9am and 45% between 9am and 10am when compared with the previous year.  Equally significant reductions of between 20% and 25% were achieved during most other hours.

On the south quays, buses journey times between Aston Quay and Essex Quay decreased by 38% between 5pm and 6pm and by 30% between 6pm and 7pm.

Tens of thousands of bus passengers each day have benefitted from these journey time improvements allowing their journeys to become faster and more reliable. And it is not just Dublin Bus routes that have gained these time savings; all bus and taxi services using the north and south quays have similarly benefitted.

NTA CEO Anne Graham said: “I very much welcome the confirmation of the benefits that the recent changes have brought. It is the case that some businesses expressed concerns over the bus prioritisation measures for the Quays, but we were always confident that not only would they deliver faster journey times for passengers, but that they would also free up scarce road space and make provision for even more buses along these stretches.

“This means that these commuters will be spending less of their time on a bus, and more time on the things they would prefer to be doing.

“These figures also highlight the fact that when it comes to buses, a relatively modest investment can deliver tangible results in terms of reducing journey times, and make public transport more attractive.

“Expanding existing bus services, developing new services and investing in a serious way in bus infrastructure, are the keys to tackling Dublin congestion in the years ahead, and that is precisely what NTA wants to do through our Bus Connects programme.”

“These bus priority measures have made an immediate and positive impact on our services using the quays and also across O’Connell Bridge and D’Olier St.

“Some of our busiest and most frequent services are now seeing up to 30% reduction in journey time along these stretches of quays. We carry thousands of customers each hour along the quays and these traffic measures have unlocked a longstanding congested area for buses and customers alike”.

“The changes made on the North and South Quays have demonstrated considerable journey time savings for public transport along both sides of the river.

“In addition, the changes have benefited cyclists and pedestrians with more space and general lessening of traffic noise and intrusion.

“The changes have allowed the start of tram driver training on the LCC line to go ahead with minimal impact on the city centre. The benefits to the bus fleet have been felt city-wide with less queuing, delays and with a much more reliable journey time through the city centre.”

Minister for Transport, Tourism and Sport Shane Ross T.D. said: “I’m very pleased that this initiative is delivering what it promised and that thousands of commuters are seeing the benefits daily.

A 30% reduction in travelling time is good –  not just for bus and taxi passengers, but also frees up the road for cyclists. A win win!”

Average time savings of over 4.5 minutes have been achieved during the 9AM-10AM morning peak time period.

From 8AM-9AM, the time saving is almost 3.5 minutes. Graph 1 below shows journey times for this route throughout the day, for comparable weeks in 2016 and 2017.

In addition to the time savings, the profile shows that journey time reliability has also been improved.

On the South Quays, the bus journey time from Aston Quay to Essex Quay has been analysed. Average time savings of almost 2.5 minutes have been achieved during the 5PM-6PM evening peak time period. The graph below shows journey times for this route throughout the day, for comparable weeks in 2016 and 2017. 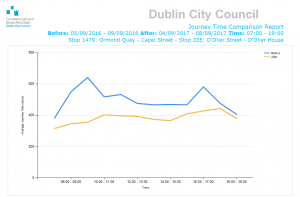