Improved flood defence to be delivered as part of the scheme.

Deputy Lord Mayor, Cllr. Cieran Perry and Minister Paschal Donohoe, have today joined representatives from the National Transport Authority and Dublin City Council to review progress of the construction of the 2km ‘missing link’ between Sutton and Clontarf that will become a cycleway and pedestrian promenade from the Wooden Bridge to Causeway Road on the seaward side of the Clontarf Road and James Larkin Road. Forming part of the “East Coast Trail”, this project will complete the northern section of the route and provide a continuous cycle and walking route between East Wall and Sutton.

As part of the project, improved flood defence will be delivered over the full length of the scheme, including repairs to the existing sea walls and new retaining wall construction at the northern and southern end of the site.

Construction began in May this year and is scheduled for completion in Summer 2016. The scheme which is located within the UNESCO designated Dublin biosphere area was planned and designed to take into account the sensitive environmental and ecological issues, with the construction works incorporating restrictions at particularly sensitive times during this period. The scheme will be delivered at a cost of €6.5m.

The existing road carriageway width will be reduced to accommodate the facility and the project will require the modification of the existing junctions at Bull Road and Dollymount Park. A number of build-outs are to be constructed along the eastern side of the carriageway to facilitate pedestrian crossings and bus stops with build outs on the west side to accommodate parking facilities for resident and business owners. Additionally, the existing culvert located opposite St. Anne’s park is to be extended as part of the works. St Anne’s Public car-park is suspended for the duration of the works to accommodate the construction activities.

Deputy Lord Mayor, Cllr. Cieran Perry said: “I’m delighted to review the progress of this important scheme today. The latest figures show that there has been a 14% increase in commuter cyclists over the past year. Currently, 6% of commuters cycle and the aim is to grow this to 15% over the coming years.  The provision of high quality cycling facilities is essential to encouraging people to take up cycling for commuting or recreation in Dublin. The project will also be important for pedestrians in the area, offering a segregated pedestrian facility.”

Minister for Transport, Tourism and Sport, Paschal Donohoe TD, said: “This project represents the ‘missing link’ on the very popular Northside cycle and promenade between Sutton and Clontarf, with the construction including flood defence and arterial water main. Dublin is an ideal city in which to cycle and it is a key objective of transport policy to ensure that investment is targeted in the most effective way that encourages people where possible to leave the car at home and to walk, cycle or avail of public transport. This project like many others funded by my Department through the NTA Sustainable Transport Grants Programme aims to improve the cycling offering around the city. The scheme will be delivered at a cost of €6.5m, a fraction of the cost of the original proposed scheme for the area, estimated at circa €20m, and in the long term it will form part of the broader East Coast Trail which will provide the people of Dublin, both north and south, with a great amenity.”

Anne Graham, Chief Executive Officer of the National Transport Authority said: “The National Transport Authority, working in partnership with Dublin City Council, looks forward to the delivery of this important pedestrian and cycle project. The scheme comes as part of the broader East Coast Trail. As well as delivering an important recreational and amenity route, it will also form a safe, high quality cycling route for many daily users.”

There has been multi-agency co-operation on this integrated scheme, as a way to ensure the work is completed in a reasonable time period and cost effective manner. Dublin City Council is responsible for the overall project management as well as funding the flood defence, while the National Transport Authority and Irish Water are funding the pedestrian and cycleway and new watermain elements of the scheme respectively. 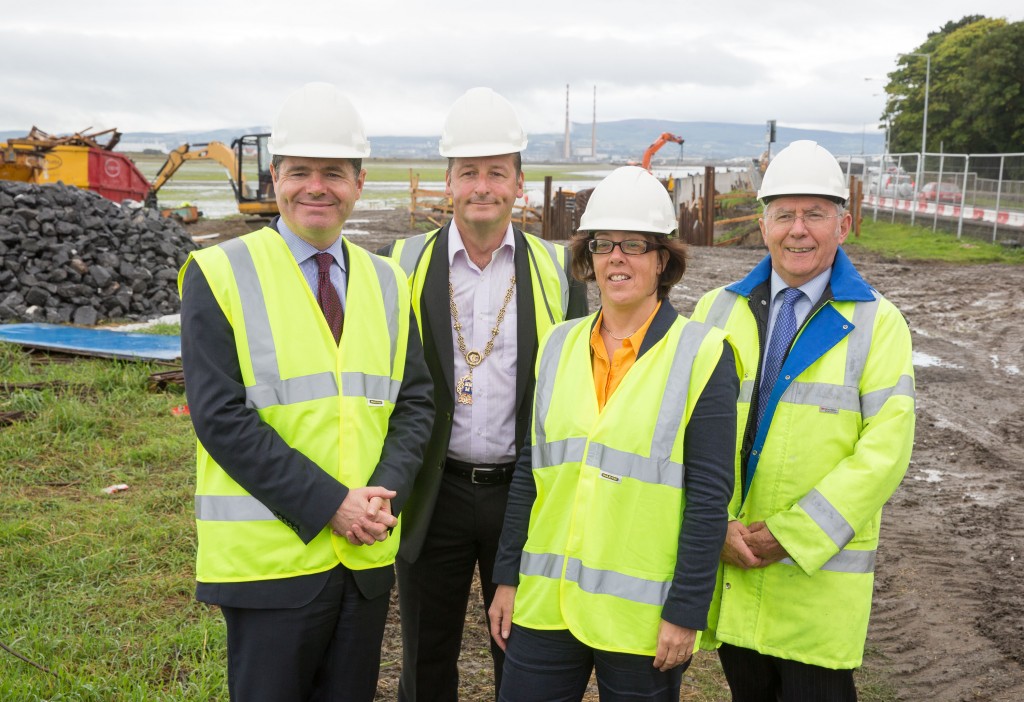 About the East Coast Trail

In 2007, a study was carried out on the feasibility of providing a walking and cycling promenade around Dublin Bay from Sutton to Sandycove (S2S).  The project did not proceed beyond feasibility study stage at that time for a variety of reasons, including concerns about the potential environmental impact and high estimated capital costs.

In December 2013 the National Transport Authority published its Greater Dublin Area Cycle Network Plan.  That Plan contains proposals for an East Coast Trail, which will deliver the majority of the benefits of S2S. These proposals include the current scheme, which fills in the ‘missing link’ between The Causeway and the Wooden Bridge at Clontarf, and a coastal route between Blackrock and Ringsend for which the Authority commissioned a corridor study in November 2014.  The study has identified a preferred alignment for the route on the south side of the Bay, taking account of the environmental constraints within the study area.  A final report is being revised at the moment for submission to the Authority.

Within the Greater Dublin Area, the East Coast Trail extends from Arklow in the south to Drogheda in the north and incorporates the full extent of the S2S project.  The Cycle Network Plan identified an indicative route for the trail, mostly along greenways separated from traffic, and with some localised use of quiet minor roads in the areas most removed from the city, with the aim of achieving a high-quality and attractive cycle route.

The route follows the proposed alignment of S2S on the north side of the Bay.  On the south side, while some local deviations from the S2S alignment are proposed due to the environmental designations that apply to the Bay, the route largely follows the S2S route identified previously.