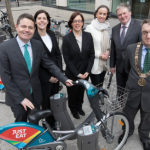 The expansion of the scheme will increase the number of Just Eat dublinbikes stations in the city to 116 (from 101) and the number of bikes to 1,600 (from 1,500).  In addition to George’s Lane, bikes will also be available to annual members and short term subscribers from 3.30pm today (27th March 2018) in the vicinity of the Grangegorman campus with three stations opening around Grangegorman Lower.  These are at St Brendan’s Way (South), the Clock Tower (Central) and Ivy Avenue (North).

The Just Eat dublinbikes scheme is one of the most successful public bike share schemes in the world and is set to grow even further with the addition of these new stations. Figures published in February 2018 show there are 67,890 long term members of the scheme and since launching in 2009 there have been 22,417,162 journeys. 96% of all journeys taken are completely free and the average journey time for users is just 14 minutes.

Speaking on the day of the opening of the new bike stations, Ardmhéara Mícheál Mc Donncha said “The Just Eat dublinbikes Scheme is one of the most successful public bike share schemes in the world and the expansion of the scheme into Grangegorman and the surrounding areas provides 15 new stations and 100 new Just Eat dublinbikes which will be available to use by the end of June 2018. I would like to congratulate everyone involved with this project, including Dublin City Council, JCDecaux Ireland, Just Eat and the National Transport Authority who provided funding for the scheme.”

Minister Paschal Donohoe said ‘When it was first launched in 2009, no-one could have envisaged the future success of the Just Eat dublinbikes scheme. With more than 22 million journeys taken since that time, their addition to the Dublin transport landscape has been transformative. I am delighted that Dublin Central is benefitting to such an extent, with the launch of 15 additional stations here today. The locations chosen, with their proximity to the city centre, make them ideal. What’s more, the inclusion of three stations at Grangegorman will provide excellent alternative transport for the thousands of students attending at DIT. I commend everyone for their work in the further roll-out of the scheme and look forward to the continuation of that work in the years to come.”

Anne Graham, CEO, National Transport Authority, said: “Bike share projects such as the Just Eat dublinbikes scheme have been a great success story. We have seen mode share for cyclists increase dramatically in the Dublin city centre area from 2.3% in 2006 to 6.0% in 2016. The Just Eat dublinbikes scheme has played a significant role in getting people to shift to sustainable modes, and particularly to cycling. The National Transport Authority is delighted to continue to support Dublin City Council by providing a sustainable transport grant of €1.2m to support this expansion of the scheme.”

Commenting on the expansion of the scheme Richard Shakespeare, Assistant Chief Executive in Dublin City Council said; “The expansion of the Just Eat dublinbikes scheme is great news for the city and will provide even more people with access to a high quality means of sustainable transport. With the continued support of the National Transport Authority, the strategic expansion to Grangegorman will be of great benefit to residents, workers and students in the area and will further support the growth of cycling in the city.”

Speaking at the announcement Managing Director of Just Eat, Amanda Roche Kelly said, “The expansion of the Just Eat dublinbikes scheme is an exciting announcement for us. We are delighted that our partnership with Dublin City Council and JCDecaux Ireland is supporting further expansion to meet the continued demand for this much-loved Dublin scheme. The Grangegorman area is an increasingly vibrant part of the city. We see this in the range and diversity of cuisines available through our restaurant partners all through this part of the city. We believe that the Just Eat dublinbikes bring a great new asset to the residents of the area and are delighted to be part of the celebrations today. The Just Eat dublinbikes is a great partnership for us and we have a number of exciting initiatives planned for both Just Eat and scheme users for the summer months.”

Joanne Grant, Managing Director JCDecaux Ireland said: “We are very pleased to be able to deliver another expansion to the Just Eat dublinbikes network.  This latest development will make the scheme more widely available to the people of Dublin and visitors to the city and will have a positive effect on the quality of life in the capital. It is our aim to continue to provide a world class bike share scheme in Dublin which is second to none and to help grow the number of people cycling.”

Photos will be syndicated to picture desks by Naoise Culhane Photography.

The Just Eat dublinbikes scheme is a public bike hire scheme operated by JCDecaux Ireland on behalf of Dublin City Council. Launched in September 2009, the scheme consists of 101 stations and 1,500 bikes. The Grangegorman expansion will see 15 new stations and 100 new bikes added to the network over the coming months. The expanded bike scheme will provide for improved linkages between Grangegorman and the city centre and will greatly benefit residents, workers and students at the Grangegorman Campus.

This expansion is facilitated by a €1.2 million sustainable transport grant from the National Transport Authority (NTA). This follows the €5.2 million provided by the Authority towards a 57 station Phase 2 expansion over 2013-2014. The funding provided allows for the construction of 15 new stations, the majority of which will service Grangegorman and the surrounding local area with additional capacity provided in other areas of the existing network. Operational costs are supported through memberships and sponsorship of the scheme by Just Eat Ireland.

Just Eat plc operates a global online marketplace for food ordering and delivery. Based in London, Just Eat uses proprietary technology to provide a fast and efficient service to 19.6 million customers and 78,700 Restaurant Partners worldwide. Just Eat is a member of the FTSE 100 index.

In Ireland, Just Eat has over 2,100 takeaway restaurants online and consumers can access their favourite local eateries for lunchtime and evening options with a choice of over 40 cuisines. Over 80% of customers order either via the app or on mobile device and the Just Eat app has been downloaded over one million times.

About JCDecaux Ireland:
JCDecaux Ireland is a subsidiary of JCDecaux the world’s largest Out Of Home Media company.  Providing a real complement to public transport, JCDecaux’s bikes improve the quality of city life and optimise travel options, in line with current environmental and public health targets.