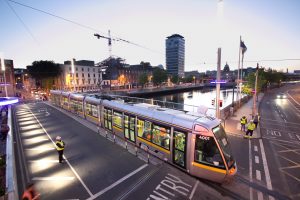 The Minister for Transport, Tourism and Sport, Shane Ross TD, today attended the Luas Cross City gauge run which tested the first trams on the new route.  The project is entering the final six months of work in advance of passenger services commencing in December.

The gauge run is taking place over two days from St. Stephen’s Green along the 5.9km route to Broombridge, Cabra. Two trams are being brought at walking speeds along the Northbound and Southbound alignment, stopping at each new platform and manoeuvring along the route to allow a range of measurements and tests to be carried out.

Speaking at today’s gauge run Minister Ross said “Luas Cross City has been a priority project for the Government and is on target to be completed and fully operational by the end of this year.  The project will be a very welcome addition to the public transport network in Dublin, enhancing the overall capacity available which will encourage more people onto public transport and help in alleviating congestion in the city as the level of economic activity continues to grow.”

Earlier this week the Minister chaired the final meeting of the Luas Cross City Project Group comprising business representatives, the NTA, TII, Dublin Bus and an Garda Síochána.  The group was established at the beginning of the project to monitor progress and to ensure that the city remained open for business throughout the construction period.  There has also been on-going consultation through the Luas Traffic Forum between the National Transport Authority (NTA), Transport Infrastructure Ireland (TII), Dublin City Council, Dublin Bus, an Garda Síochána, business representatives and contractors on the impacts of works on traffic and local businesses.

The Minister continued “I would like to congratulate the National Transport Authority and Transport Infrastructure Ireland on delivery of this major public transport project on time and within budget.  I would also like to acknowledge the very positive engagement between all stakeholders throughout the construction period.  While some level of disruption is inevitable during construction of a project of this scale, there has been ongoing liaison with business representative to minimise the impact of the Luas works on traders particularly during the busy trading periods of the year.”

“I recognise that the past few years have been challenging for the city and for businesses and we are all looking forward to the works drawing to a close and the start of operations by the end of the year. I have no doubt that Luas Cross City will bring huge benefits to the city, including to the businesses in the city centre and along its route and I am very much looking forward to seeing it up and running.”

“The gauge run marks a significant achievement for all the parties involved in the LCC project.

“The city is a step closer to having a greatly enhanced Luas service. Luas Cross City will expand an integrated public transport system in Dublin by extending the existing Green Line at St. Stephen’s Green to Broombridge and providing an interchange between the existing Red and Green Lines in the City Centre.

“Once operational it will significantly increase passenger journeys per annum on the Luas system and will open up new areas of the city to the benefits of a modern light rail system.

“The completion of LCC in December will play an important role in alleviating congestion and enhancing the public transport experience for commuters.”

Micheal Nolan, CEO, Transport Infrastructure Ireland (TII), added, “This project is the biggest infrastructure project in Dublin for years. However, it will not just benefit the city centre as the route also reinstates a transport corridor in the northwest of the city centre along the former Broadstone railway cutting and provides additional access to Phibsborough and Cabra.”

“Over the coming months testing will continue alongside the finishing of paving, footpaths and carriageway reconstruction work. From mid-September the training of drivers will start and passengers services are due to commence in December.”