The Minister for Transport Eamon Ryan, Minister of State Hildegarde Naughton, the National Transport Authority (NTA) and Bus Éireann today announced the start of four new and improved routes linking Limerick to its hinterland and nationally under the new Connecting Ireland Rural Mobility Plan, as well as three enhanced routes in the North-East of the country where new connections are being made, alongside the doubling or tripling in frequency of existing services. 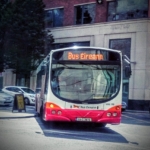 Minister of State at the Department of Transport, Hildegarde Naughton, attended the launch event in Limerick City.

Welcoming the new services, Minister for Transport Eamon Ryan said: “The Government is very conscious of the need to connect people and places in rural as well as urban areas, with accessible, integrated, and sustainable public transport. The type of connections being announced in Limerick today demonstrate our commitment to linking towns and cities, and providing improved access to centres of employment, education, healthcare, and retail.”

“New routes, more routes and enhanced capacity on our public transport network in addition to the fare reductions introduced by the Government, will make it easier for people to be able to access and choose public transport as their preferred way of travelling this winter.”

Speaking from the launch in Limerick today, Minister Hildegarde Naughton said: “We are very much facing the unknown as we enter a winter of uncertainty presented to us from the global energy crisis. We in Government are committed to doing absolutely everything in our power to support households and businesses through what are incredibly turbulent times. The delivery of 1.7 million new kilometres of bus services being announced today provides a choice for people living and working in the Mid-West and the North-East regions. They now have the choice of public transport that was previously not available to them; they now have the choice to keep more of their own money by using less energy through opting for public transport.”

Continuing, Minister Naughton said “Under Connecting Ireland, we are aiming to increase public transport connectivity for rural Ireland. Public transport is not only an environmentally friendly option but also socially inclusive and can be a cheaper way to get around. Today’s announcement has a far reaching benefit for households, communities and businesses across 10 counties with 72 town and villages benefitting from enhanced services and connectivity. Our plan is to increase public transport connectivity, particularly for people living outside our major cities and towns.” 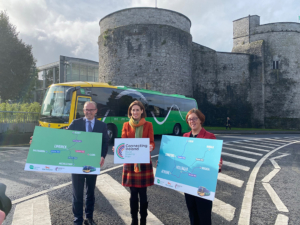 Extending links from Limerick to Ballybunion, Mitchelstown and Scarriff

The extended Route 314 will link Limerick to Ballybunion, while Route 328  Mitchelstown will triple in frequency, and Route 345 to Scarriff will increase to five daily round trips.

There will be a trebling and doubling of service frequencies and new regional connections between the Midlands and Northeast regions linking Dundalk and Ardee, Drogheda and Trim and Athlone to Longford.

CEO of the National Transport Authority, Anne Graham, said “the Connecting Ireland Rural Mobility Plan which has been developed by the NTA aims to increase public transport connectivity, particularly for people living outside major cities and towns.  With the launch of four new routes linking locations across Limerick and its hinterland and three enhanced services in the north east people in more towns and villages have the option of using public transport services which are now more frequent and reliable”

“We at Bus Éireann are delighted to introduce these new and improved services from Sunday 23 October, significantly increasing access to public transport for more than 70 towns and villages in 10 counties,” said Stephen Kent, Chief Executive Officer, Bus Éireann. “Thanks to the National Transport Authority, through the Connecting Ireland Programme/Rural Mobility Plan we are adding 1.7 million kilometres for our customers while creating almost 50 new jobs. Demand for our services is higher now than pre-pandemic, and these new routes and services enable us to connect more people with who and what matters to them.  We will continue to work together with the NTA to enhance connectivity across the country, delivering an affordable, reliable and sustainable bus service for communities throughout Ireland.”

Further details on new services can be found at www.buseireann.ie.