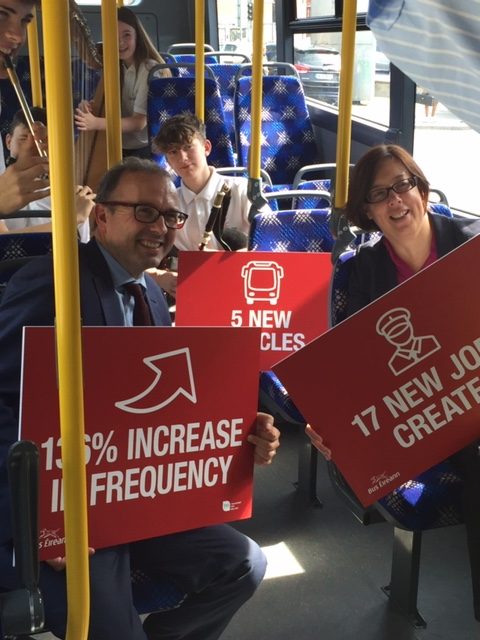 Bus Éireann in conjunction with the National Transport Authority (NTA) are pleased to announce the introduction of significant service enhancements to services between Drogheda Town and Laytown commencing from Sunday, August 11th 2019.

This enhanced network will be delivered by a fleet of 5 new state-of-the-art buses. All vehicles will be fully wheelchair accessible and feature the Transport for Ireland livery (TFI).

The enhancements will see service frequency more than double between Drogheda and Laytown with two routes D1 and D2 providing a combined 15 minute frequency during the day.

The combined D1 and D2 timetables will provide a high frequency service linking Laytown and Bettystown to Drogheda up to every 15 minutes (Monday to Sunday).

The main service enhancements are as follows:

Bus Éireann will also be introducing service enhancements to the Route 101 service, which operates from Drogheda-Balbriggan-Airport-city centre from Sunday the 11th of August.

The main service enhancements are as follows:

“The D1 and D2 and the Route 101 are significant network enhancements, which have been designed to better facilitate customer demand and encourage increased usage of public transport in the Drogheda, Laytown and Bettystown area.”

“Today’s announcement represents a significant improvement to bus services for commuters in Drogheda and surrounding areas as we look to further expand the Transport for Ireland integrated public transport network.

Through the introduction of a new fleet of fully accessible buses on the D1 and D2 routes, commuters in Drogheda, Laytown and Bettystown will now have a high-quality service that’s more frequent with later services, seven days a week.”

The best value fares are available using a Leap Card, which guarantees savings of up to 30% on cash fares. For more information see about.leapcard.ie.

The enhancements to D1, D2 and Route 101 will be introduced on Sunday the 11th of August 2019 and have been approved by the National Transport Authority.