Routes KK1 and KK2 will be operated by City Direct, as part of the Transport for Ireland public transport network. The two-route city network consisting of 64 stops is fully funded by the National Transport Authority.

The routes will share a path through the city centre, serving Parliament Street, Market Yard and John Street Upper. Each route operates every 30 minutes Monday to Saturday. Services on Sunday operate by the hour, with services every half hour during the core part of the day. Late night services will operate on Friday and Saturday nights.

All bus stops are newly paved with Kassel kerbs, installed to facilitate wheelchair access to the low-floor buses and will provide passengers with information at each stop.

“We are thrilled to launch the KK1 and KK2 bus routes in Kilkenny. The introduction of cross-city bus routes will deliver commuters, students, families and visitors to their destinations quickly and comfortably in state-of-the-art buses.

The services also offer an environmentally-friendly alternative to personal car use in Kilkenny, in line with the NTA’s commitment to the Climate Action Plan.

Kilkenny is an up-and-coming area of the country, and these new bus services will support the city’s economic and population growth for years to come.”

“Kilkenny County Council is delighted to have partnered with the NTA in the delivery of the city bus services, and we look forward to the improvements it will bring for residents and visitors.”

Maps and passenger information will be distributed locally, and timetables will be available on our website and the TFI Journey Planner. 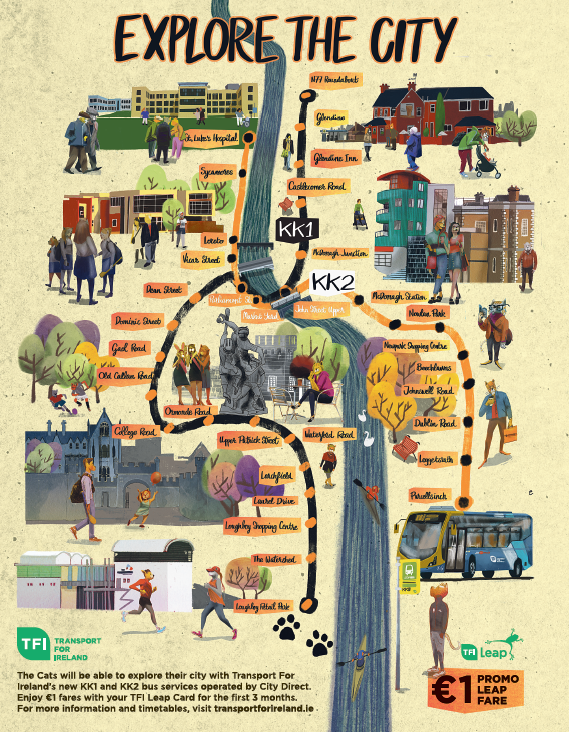