Following a detailed examination of transport demand and growth projections in the North Dublin region, the National Transport Authority has recommended that a new Metro North be developed, running underground from St Stephens Green through Ballymun, under the Airport and on to Swords (by-pass), in order to best meet the future transport needs of this rapidly growing region. The Authority has further recommended that the design and planning stages of the project be advanced now, so that construction can commence after 2020, with services commencing in 2026, at an overall project capital cost of €2.432 billion (excl VAT).

Speaking today, Minister Donohoe said: “I warmly welcome the Cabinet decision to proceed with the proposed new Metro North.  This project will cater for the current and the forecast population growth in the region. In Census 2011, Fingal registered the third-highest growth rate in the country at 13.9%, close to four times the population growth of Dublin city and almost double that of other Dublin county council areas.  Failure to put appropriate plans in place now to meet the long-term transport needs of this area would have meant increased congestion down the line which would have ultimately threatened our future economic development.

Anne Graham, CEO of the National Transport Authority said: “Population and employment growth in Fingal/North Dublin will stimulate increased travel across the region over the medium term that cannot be catered for by car.  Extra public transport capacity is required, supplemented by cycling and walking for shorter journeys.

“We have been examining the transportation requirements of this region in great detail for quite some time. It’s a key growth zone in the country’s Capital region, and it is important that the transport solution we invest in now is sufficiently robust to serve the growing population well for decades to come.”

She added that the new Metro North scheme will be included in the Authority’s proposed Transport Strategy for the Greater Dublin Area – which will be published in the coming weeks, and will be subject to public consultation.

In December 2014, the Authority published a short-list of 6 different options for consideration, and invited members of the public and other interested parties to participate in a public consultation on these options.  342 submissions were received and were analysed, in conjunction with detailed modelling work and engineering input.  The Authority has concluded that the new Metro North option (LR7 / “Optimised Metro North” in the Dec 2014 document) is best placed to serve the region’s needs over the medium term.

Light rail presents a suitable option where the level of customer demand falls between bus and heavy rail capacities.  Luas is already a successful component of the Capital’s transport provision; it has been very well received since it began operations in 2004, and already integrates successfully with other modes along its routes.  The Luas Cross City extension, which is currently being built, will further enhance its contributions to Dublin’s transport network and will provide many new interchange opportunities in the city centre. Unlike heavy rail, light rail can have ‘shared use’ sections, although ideally, it should be segregated from general traffic as much as possible.

new Metro North, as recommended by the National Transport Authority will operate 60 metre trams, providing a passenger capacity of 9,900 people per direction per hour. Station provision in the core city centre will be limited to St Stephens Green and Upper O’Connell Street as the current red and green lines (including Luas Cross City) offer plenty of central stop options.

“In short, we will develop a new transport corridor in the region, bringing people from Swords and the airport into town and vice versa.  This will have a hugely beneficial impact on the capital region as a whole”, concluded Anne Graham. CEO of the National Transport Authority. 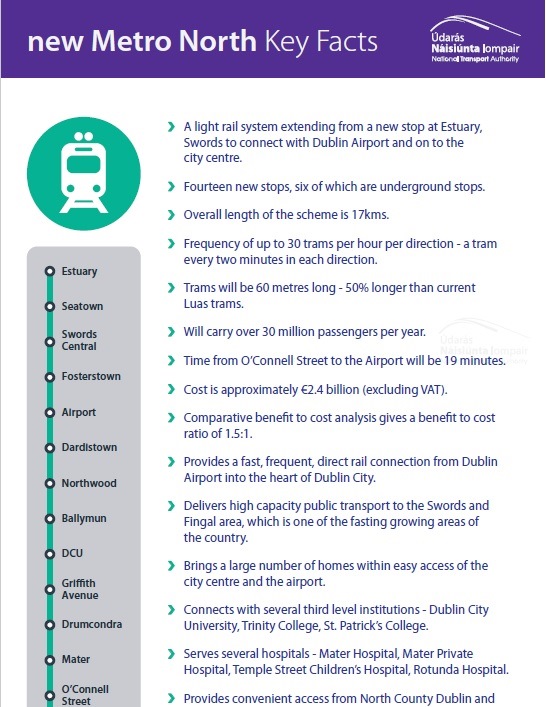