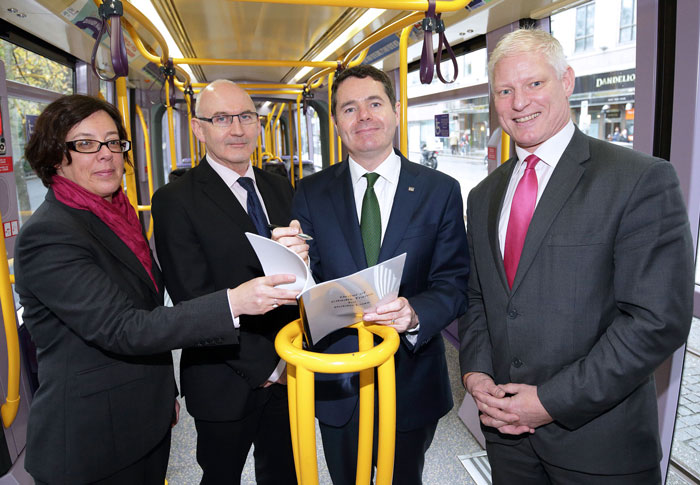 Wednesday 25th November 2015, Dublin – Minister for Transport, Tourism and Sport, Paschal Donohoe TD, was today (Wednesday) present with Anne Graham, CEO of the National Transport Authority and Michael Nolan, CEO of Transport Infrastructure Ireland (TII) as an order for new Luas trams was placed. The order of seven “Citadis” trams with Alstrom Transport SA is the next important step as the Luas Cross City project progresses. Placing the order for additional trams now, will ensure their delivery in advance of the Green Line extension coming into operation at the end of 2017.

The new trams will be a longer version of the type currently being used on the Green Line – increasing from 43 metres to 54.6 metres. This will allow for 60 additional passengers to be carried per tram – a total of 369 people per tram. The cost of the trams is €36.5m excl VAT.

Speaking at the St. Stephen’s Green tram platform today, Minister Donohoe said: “Placing the order for the new trams today, is another important step in this project. The new trams will carry more people and allow the Luas Cross City extension to provide a frequent, efficient and integrated transport option for the city centre and all the way to Cabra.”

Anne Graham, CEO; National Transport Authority, said: “All around the city centre tracks are being laid and each month is bringing this project closer to completion. Having new trams in operation from day one is a fundamental part of the project and will ensure it is a success and beneficial to the public from the outset.”

Micheal Nolan, CEO, Transport Infrastructure Ireland, TII, added: “As the agency tasked with the delivery of such an important city centre transport project each landmark,  such as today, is significant and shows the real and visible progress of the project. “

The current Red and Green Line trams are both tram-types within the Citadis range. The tram-stop platform lengths on the Luas Cross City are already designed to accommodate longer trams. The original Green Line platforms between St. Stephen’s Green and Sandyford will be extended in length in advance of the delivery of the new trams. The trams will be maintained at both Sandyford and Broombridge depots. The trams will be manufactured by Alstom Transport SA in La Rochelle, France.