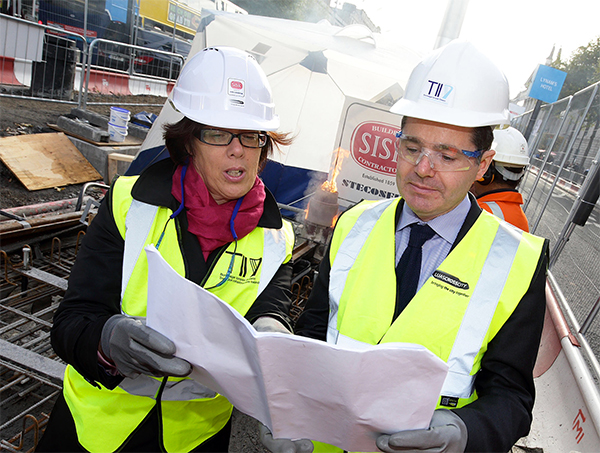 Minister for Transport, Tourism and Sport, Paschal Donohoe TD, was today (Thursday) on O’Connell Street to oversee the first welding of rail tracks for Luas Cross City project on the historic thoroughfare. The excavation and preparation for rail tracks works started in the College Green area, Westmoreland Street and O’Connell Street during August 2015. Over the coming weeks rail tracks will be delivered, laid and welded in place on key streets. Additional streets along the 5.9km route will be excavated and prepared over the coming weeks and months.

The project is due for completion at the end of 2017. It will see an additional 10 million passenger journeys with the extension of the Green Line from St. Stephen’s Green crossing to O’Connell Street and onwards to Broadstone and Cabra. There will be 13 new stops, 8 of which are in the city centre, creating an interchange with the Red Line on O’Connell St and increasing public transport options for people.

“While there is inevitable and unavoidable disruption for people as the project continues, seeing the tracks appear on the streets clearly shows the progress of the project and that it’s becoming a reality. As we approach, what we all hope, will be a very successful and busy Christmas period for shops and businesses, I am confident that the collaboration between stakeholders will be maintained to keep the city functioning and open for business.”

Anne Graham, CEO, National Transport Authority, said: ‘The tracks being welded into place today marks another step in the project; another step closer to completion and having an enhanced Luas service across the city. Without a doubt, a project of this type means there is a constant and sometimes difficult balance to be achieved. We need to keep the city moving, allow people to go about their day, do business, commute, live and all whilst building a new tram rail line through the heart of such a busy city’.

“We are over two and half years into the project and for the remainder of the project we will continue to work alongside traders, transport providers, businesses, residents and citizens to minimise disruption to people’s day-to-day lives. Once again we would particularly like to thank the people and businesses of Dublin for their patience.”

Rory O’Connor, Deputy CEO, TII, the body responsible for the delivery of Luas Cross City, also added: ‘The Luas Cross City is the biggest infrastructure project in Dublin for a number of years and one which will have a lasting impact for the city. The proposed route reinstates a transport corridor in the northwest of the city centre along the former Broadstone railway cutting and provides additional access to Phibsborough and Cabra.”

Main aspects of the works: