It will deliver an accessible, integrated transport network that enables the sustainable growth of the Cork Metropolitan Area as a dynamic, connected, and internationally competitive European city region as envisaged by the NPF 2040. The Strategy is heavily predicated on sustainable transport investment and provision. The Light Rail Transit system is envisaged to serve 32% of the CMA’s population and 60% of its jobs by 2040. The suburban rail network will serve almost 20% of its population and 30% of its jobs.

BusConnects is the work-horse of the public transport system carrying 85m passengers per annum. The combined network will provide seamless interchange between bus, rail, light rail and Park and Ride services. Walking and cycling will play a significant role for shorter trips through the delivery of significantly enhanced walking and cycling networks and supporting public realm improvements. Overall, it is considered that the Strategy will enable the CMA to grow in a successful and sustainable manner, delivering an efficient, reliable and effective transport system to underpin its ambitious growth targets. This will in turn increase the liveability and attractiveness of the CMA as a region to live, work, visit, play and invest in. 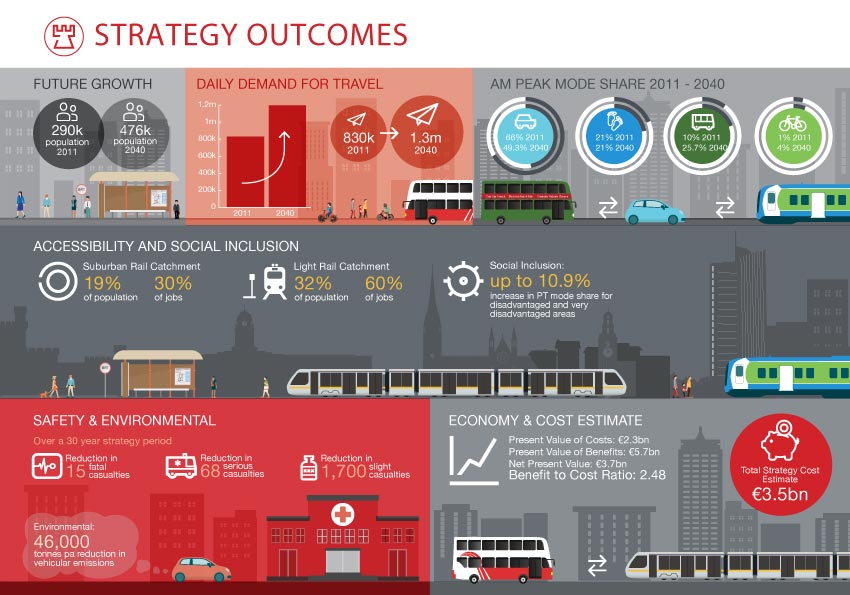