The development of an east-west rapid mass-transit corridor has been a long-term objective for the CMA articulated by the joint Cork Area Strategic Plan (CASP) and a number of statutory development plans and local area plans of both Cork City and County. Following detailed analysis of projected travel demand within the CMA, this Strategy proposes that the East-West Transit Corridor is best served through the provision of a new Light Rail Transit (LRT) tram system. This analysis marks a departure from previous proposals for a lower capacity Bus Rapid Transit (BRT) system to reflect the more ambitious growth targets of the NPF and the requirement to future-proof such a route up to and beyond the 2040 horizon year.

The provision of an LRT system will be a focal point to enable the growth of population, employment, health and educational uses as envisaged by the NPF 2040. The LRT system will unlock strategic development opportunity and windfall sites in its catchment areas. The route shown is indicative only, further feasibility work is required to examine alternatives indicative route. During the early years of the Strategy, it is intended to identify and protect an alignment for the scheme, allowing prioritising development consolidation along the corridor. The over-arching objective of the LRT is to enable the Cork Metropolitan Area to consolidate land-use and transport along a high frequency, high-capacity public transport corridor. The early finalisation of the preferred route will provide greater certainty for future planning and development to pursue the higher densities required to meet NPF 2040 population and employment targets for Cork and the planned expansion of third level educational institutions.

In August 2020, Jacobs Engineering Ireland was awarded the contract to do the work on the proposed Light Rail Transit (LRT) system which will run from Ballincollig, on the western outskirts of Cork city, to Mahon Point in the east. The 17km east-west Luas-style system is one of the biggest elements of the ambitious Cork Metropolitan Area Transport Strategy (CMATS). 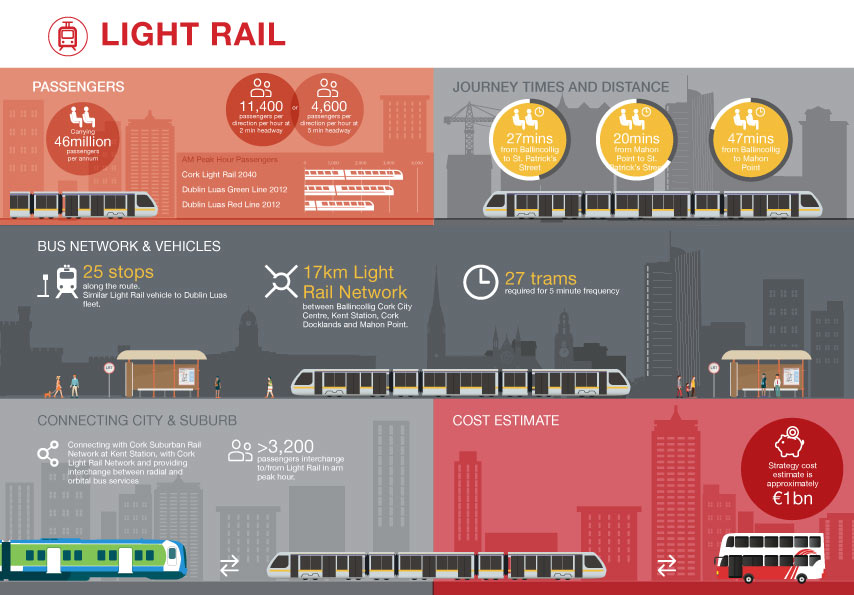